There were two reports of semis being blown over as a result of the wind gusts.

The first was reported just before 1:30 Sunday afternoon in the 20,000 block of State Route 31 south of Mt. Victory.

The driver, Kenneth Shuman, of Georgia, was transported to the hospital for treatment of minor injuries.

That section of 31 was closed for around 2 hours.

The second one occurred around 5:15 Sunday afternoon on U.S. 68 around 3 miles north of Kenton. 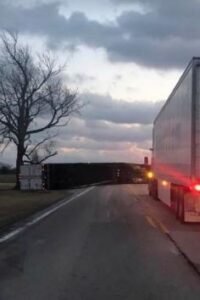 The driver, identified as Stacie Valdaz, of Minnesota, was transported to the hospital as a precaution.

68 was closed for around 2 hours for cleanup.