Funeral services for Junior Otis Chamberlin will be private. Burial will take place at Grove Cemetery in Kenton. The Price-McElroy Funeral Home in Kenton is assisting the family with arrangements.

He died on Tuesday, November 24, 2020 at The Willow Brook Christian Village in Delaware. He was born on August 29, 1925 in Mt. Victory to the late Otis and Opal (Cramer) Chamberlin. He married Dorothy Hesser and she preceded him in death.

He was preceded in death by 2 sons; Roderick Wolf, Jack Wolf, 3 brothers; Jim, Jack and Joe Chamberlin, and a sister; Wilma Orsborn.

Junior was a 1943 graduate of Mt. Victory High School.

He was an U.S. Army Veteran serving during the Korean Conflict and a member of the Mt. Victory VFW Post.

Junior retired after 33 years as a machinist for Eaton in Kenton.

He was a member of the Silver Creek United Methodist Church.

Junior was always keeping himself busy. He enjoyed woodworking, gardening, mowing his yard and tending to his fruit trees.

In lieu of flowers, memorial donations may be made to the Silver Creek United Methodist Church or the Wounded Warriors Foundation. 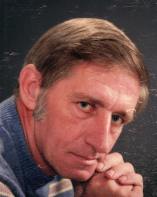