(Marion) In an inspiring ceremony, Marion Technical College recognized four outstanding alumni for making a difference in their fields and their communities. They included a teacher dedicated to helping students find a career path, a financial wiz dedicated to saving taxpayers money, an entrepreneur with his own business and a local public servant with decades of volunteer work.
• Tammi Cowell, Class of 1991
• John “Tom” Gleespen, Class of 1975
• Sue Jacob, Class of 1981
• Darl Snyder, Class of 1983
“These alumni represent the best of Marion Technical College,” said Dr. Ryan McCall, president of Marion Tech. “We are thrilled to celebrate each one and the difference they make in our community.”
Tammi Cowell of Marion is the Treasurer and Chief Financial Officer of Tri-Rivers Career Center (TRCC). She has spent 31 years in education. She was nominated by Ellen Messenger, her colleague and friend at Tri-Rivers, and Rob Cowell, her husband and Assistant Fire Chief in Marion.

“Her financial management permitted Northmor to upgrade their athletic complex, bus garage area, and concessions building without going back to the taxpayers for additional funds,” Rob Cowell said. “She also refinanced their bonds and saved $2.25 million.”
Her wise financial strategies also make a difference at TRCC.

“She implemented cost-saving measures and managed and initiated numerous grants to improve finances at TRCC,” Messenger said.
In addition to her associate degree from Marion Tech, Cowell earned a bachelor’s degree and master’s degree from Mt. Vernon Nazarene University in business administration.

“She has taken her associate’s degree and continued to build on it and has given back to Marion Technical College by serving for many years as a business advisory committee member. She is a proud of her MTC degree and is a great ambassador!” Messenger stated.

Tom Gleespen is the President of Gleespen Engineering and Surveying of Prospect. This entrepreneur has run his own business for more than 20 years as well as serving as engineer for many smaller communities. Before that, he served as Marion City Engineer and then became Deputy Director of Engineering for the City of Columbus and then Chief Deputy of Engineering for Franklin County, in charge of $60 million in capital improvements.

“Tom was ably prepared by his studies at Marion Technical College to receive his dual licenses as both Registered Ohio Professional Engineer and Registered Ohio Professional Surveyor,” said Sandra Gleespen, his wife and nominator.
Gleespen dedicated himself to many causes, donating countless hours to the Women’s Club Home, Cornerstone Alliance Church, True Life Church, and many other groups.

“Tom has consistently displayed leadership in his ethical, competent and accomplished career over decades in engineering and surveying fields,” said Sandra Gleespen, Tom’s nominator, family member and president of T&S Gleespen Enterprises. “It was often said, ‘If you can’t work with Tom Gleespen, you can’t work with anyone.’”

Annette Walton, a member of the Marion Tech Alumni Hall of Fame, nominated her sister. Sue Jacob is retired from teaching after more than 20 years in the classroom. She started at Olentangy Local and then moved to River Valley Middle School. Jacob received her associate degree in IT from Marion Tech and then went on to earn her bachelor’s degree and master’s degree in education from The Ohio State University.

“Sue has mentored many students, leading them on the path to education, with steering them in the direction of how great a place Marion is to live, raise a family and go to college,” Walton said. “She has touched hundreds of students lives, assisting in their growth along with their education. Sue has introduced them to many of the opportunities that Marion Tech has to offer.”

Jacob volunteered at her church, teaching Sunday School and assisting with a Welcoming committee for new members. She also served on the Marion Palace Theatre Board for many years and is a past board president. She has also served with the Marion Community Foundation and is a member of 100 Women Who Care in Marion. She has served in many positions of leadership including on the Marion Area Workforce Acceleration Collaborative (MAWAC) to help local students be better prepared for the jobs of tomorrow.

“Sue is a welcoming person, very Marion oriented, and for the last several years, she has been teaching her students about career choices, and having them investigate the great companies here in Marion, along with the career choices that Marion Technical College has to offer,” Walton said.

Darl Snyder started at Marion Tech at just 18. His mother, a single parent, died unexpectedly during Darl’s first year of college. This caused a cascade of challenges, including dealing with the loss of his mother, assisting with the care of his sister with autism, and being threatened with the loss of his home. Darl withdrew while he sorted out these difficulties. When life became more stable, Darl re-enrolled and managed to land on the Dean’s List while working full-time.

“He truly follows the philosophy of, ‘Failure is a lesson learned, not a reason to quit,” said his wife, Teena Snyder, who nominated him.
Teena, who is also an alumna, noted that Darl is an award-winning territory manager with 2J Supply Company. Darl also served as mayor of the village of Kirby for 13 years, on the council for four years, and has served as clerk/treasurer for 22 years. He secured a grant for a tornado siren and installation of these life-saving devices.

“Darl’s associate of applied business degree in business management was a strong foundation for his career in radio and newspaper business-to-business sales, which led to a 30-year career in heating and cooling,” Teena said. “This degree from MTC served as a springboard to earning his bachelor’s degree in business marketing with a minor in finance from Ashland University.”

Darl has volunteered on the Marion Popcorn Festival for 28 years. He is currently the president and trustee and is working to enhance relations and promote downtown businesses. He has served in a number of roles over the years, including entertainment chairman and publicity chairman.
“Sometimes, Darl would drive 100 miles to participate in meetings with popcorn festival committees, downtown business owners and Marion city leaders,” Teena said.

Darl also volunteers at churches, coached youth basketball, was a Marion Jaycee of the year, and was president and director of the Miss Heart of Ohio Scholarship Pageant.

Each inductee received a custom glass award. Their names will be added to our Hall of Fame in Bryson Hall. In addition, each one will select a book to be added to the Marion Campus Library. For more on the Alumni Hall of Fame members, go to https://www.mtc.edu/alumni-hall-fame/

For more than 50 years, Marion Technical College has welcomed thousands of students and helped them achieve their next goals. From short-term certificates to associate degrees, Marion Tech offers more than 50 programs and majors to help you get to next. Marion Tech has one of the lowest tuition rates among Ohio colleges. With zero text book costs for many classes, we can help you save money and start or advance your career.

Learn more about the great return on your investment at www.mtc.edu 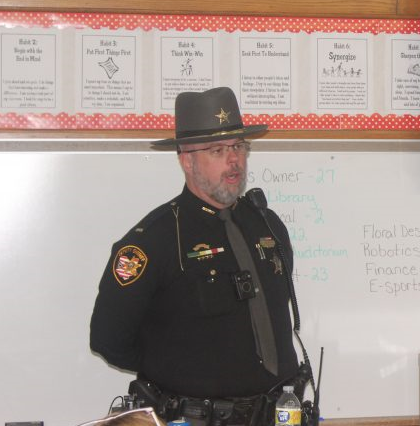